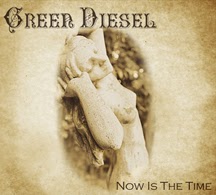 “A sound that is fresh and highly engaging. This an excellent debut from a band who are very easy to like.”
Mike Hough, Bright Young Folk.

“Green Diesel deliver folk rock with a blast of creativity and originality. Throughout ‘Now Is The Time’ traditional songs sit happily alongside self-penned innovative originals. And as long as young bands like Green Diesel remain among the custodians of British folk rock then it’s in good hands and assured a long and healthy future.”
Tim Carroll, Folkwords.

“With their debut album Green Diesel have crafted a harmonic and warming collection of songs, worthy of a jig on the deck of any ship (or living room for that matter). Refreshing in its assortment of rocked up folk songs and tales of the sea it’s clear that Green Diesel are only going to get stronger and this is an album not to be missed. ”
Joe Knipe, Artree Music.

“Exuberance and enthusiasm spills out of the thirteen songs and tunes included here … the songs and tunes on Now Is The Time clearly demonstrate the work of a band dedicated to contemporary British folk music.”
Allan Wilkinson, Northern Sky Music Magazine.

“Lively, original compositions give the old tales and ideas they draw on a new burst of life, and their innovative, seemingly limitless, imagination – from 60s style guitars to whale noises – keeps their debut album Now Is The Time from being just another traditional reinvention album, and makes Green Diesel a fashionable, old-fashioned folk band. All that remains after getting this album is seeking them out, and having a good hoe-down.”
Thank Folk For That.